Seeking Representation for my KIRKUS-STARRED Novel

“A layered and insightful exploration of how people seek meaning in careers and relationships.” 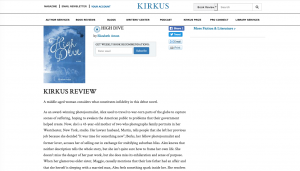 “High Dive” follows Alex Burnham, who relinquished her photojournalism career after winning the top industry award and never looked back. She married, had two children and started a successful child portrait business in upstate New York.

ing in her work. She thinks she’s found a new direction when her older sister Maggie, a single, career-driven magazine editor, reveals she’s been having an affair with a married man. The subject of infidelity raises old wounds, so Alex decides to tackle the topic through her photography. And she decides to do so in secret.

Donning a wig, she goes to New York City to surreptitiously follow and photograph Maggie and her lover. She’s joined, unexpectedly, by an attractive stranger, whose interest in the project plunges Alex and her sister into danger. As the lies she feeds her sister and husband catch up to her, Alex must decide what price she’s willing to pay to recover her artistic integrity.