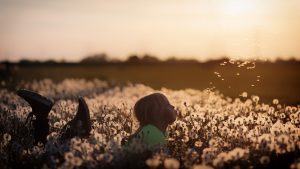 More than a decade after the plane accident that took her parents’ lives, Clara is still mothering her younger sister Justine, as well as her floundering artist husband Ash and their three children. Juggling her career as a newspaper editor in Philadelphia, Clara struggles to hold her family together despite her sister’s erratic behavior, which causes chaos at home and in her marriage.

Justine’s nights, bartending at the Hidey Hole and singing in a band, are awash in alcohol and drugs. Afternoons, she nannies her sister’s children with a magical, whimsical touch while Clara commutes long hours from their Pennsylvania farmhouse to work. Clara envies her sister’s relationship with her children, particularly Justine’s connection to Clara’s emotionally distant 11-year-old daughter, Willa.

Ash, a former New York City art star, whose once-promising painting career has faded, pins his hopes of a comeback on work about a Mexican father he’s never known. Ash’s painting flourishes after he secretly returns to an old habit—cocaine— provided by Justine during one of their many shared afternoons as they each seek their creative path.

Hoping to inspire his painting and seeking his long-lost father, Ash plans a trip to Mexico that doubles as a family vacation. While they are gone, Justine continues her spiral, setting the house on fire. Clara throws her out, but Justine’s exile doesn’t suit Willa, or Ash, who objects to family separation because of his history. So Clara reluctantly takes her back.

Justine reforms her behavior, but on the night of a potential big break for her singing career— a gig before industry professionals at the bar— the evening turns disastrous when a deer in the road causes Justine to crash her car, killing her and injuring Ash.

Justine’s life pulled Clara’s family apart, but her sister’s death though it leaves a complex scar of anger, guilt, and relief, is ultimately the salve that brings her family together.